They are nocturnal cats. Some people believe the reason they are called Clouded Leopard is because of their marking, but its is because they live high up in the canopy.

They inhabit the Rainforests of Indonesia to the start of the Himalayas. 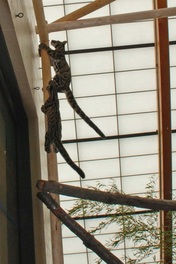 Their favourite food is Birds & Monkeys. One of the birds they love to eat are Hornbills.

Clouded leopards hunt on the ground and in the tree tops. It is a superb climber. There are very few cats that are as good at climbing as this one. But they do most of their hunting in the canopy of the rainforest. They can even climb upside down! One of the things that help them climb is their dagger like retractable claws. I find it amazing that their feet can almost turn all the way around. This helps them come down trees. Can you do that? Their tounge feels like the roughest sand paper ever. They use their tounge to get off the fur or feathers of their prey. Their tails give them balance.

Females give birth to a litter of one to five cubs. They do this every year. The cubs will leave their mother when they are about ten months old.

Even though little information is known about their population size, they are vulnerable. Palm Oil is a threat to Clouded Leopards.

how you can help